Melanie Simms is an award winning poet with over 200 publications of poetry in numerous magazines, newspapers and literary journals including: The Santa Cruz Sentinel, The Pittsburgh Post Gazette, The Daily Item, Taj Mahal Review, Penn Review (University of Pennsylvania) and CLAM (UC Berkeley).  She is the author of a book of poetry titled, “Waking the Muse.” She is also the recipient of numerous awards for poetry including a Sophie Award, A Vermont Writer’s Studio Scholarship, and a finalist in the Richard Savage Award from Bloomsburg University. Melanie served with distinction as a former Poet Laureate of Perry County, and is listed in Marquis Who’s Who of the World and Cambridge Who’s Who of Women in Publication.  Her recent poem “Sunbury” penned for the city of Sunbury, PA has received continued acclaim and air time with such radio stations as WKOK, WVIA, NPR, WMNF 88.5, (Tampa, Florida) The Tom Morgan Show, WITF, and recently PA Radio.  Presently “Sunbury” is being readied for air time with Garrison Keillor’s radio show, A Prairie Home Companion. Sunbury has also been published in the Susquehanna Life Magazine, the Daily Item and the York Daily Record and it today resides behind glass in Representative Lynda Schlegel-Culver’s Sunbury District office. She holds a BA in Creative Writing from Bloomsburg University and is completing her Masters in Writing Popular Fiction at Seton Hill University, Greensburg, PA.

Melanie has read in many venues including the Degenstein Community Library, the Sunbury River Festival,  The Bloomsburg Public Library, on live podcast at The Midtown Scholar Bookstore and at the Joseph Priestly Chapel. She recently read her poetry in the Harrisburg Capitol. First Lady Susan Corbett attended. Melanie has also shared her poems with the Pennsylvania Cable Network, and has upcoming readings in November with former Harrisburg poet laureate Nate Gadsden’s  TV Show “Life Esteem” (WHP-21, CBS), and “Tell Me a Story” with Joy Hockman (WFTE, Scranton, PA).

Melanie hails from a talented literary family including her late mother Elinor Melvin a poet, pianist and former newspaper editor, and her Uncle, Patrick Sloyan, a two-time Pulitzer-prize winning war journalist from Newsday.

Melanie’s poems are unique in that they exude a certain physicality that is both sensuous and deeply mysterious. One senses the ‘…beyond’ in them, at the word’s edge where the line meets the end of the page, like fire in the darkness where night meets light, opposites collide to create an emerging voice that often succors our spirits in her wisdom. Melanie’s poems are so enjoyable to read and enjoy.
–  Jimmy Santiago Baca, Poet

e Simms is a poetic force of nature. She has unbridled enthusiasm for the craft of poetry, and for the promotion of poetry. She is an impressive poet and person.
– Jerry Wemple, Professor of English, Bloomsburg University

Melanie Simms has the rare gift of seeing the world around her in a slightly different way than the rest of us might.  She  then weaves wonderful, magical descriptions of what she sees – what she feels – that allows the reader to see things through Melanie’s eyes and feel them in Melanie’s heart.  Her poetry describes scenes and emotions that swirl all around us every day, but we never take the time to pay attention.  Melanie pays attention and brings them to life.
– Craig Quigley (Admiral, Retired, Former Deputy Assistant Secretary of Defense for Public Affairs)

To purchase the poetry of Melanie Simms: 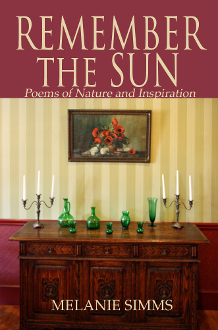